IndiesVSPewDiePie refers to an even that happened on November 21st. Now, I know what you’re thinking:  What is IndiesVSPewDiePie?   It was a game jam!  You may also be asking, what is a “game jam”?  Well, luckily for you, I know, as I was a part of the game jam!

A game jam is where you have a certain number of hours (72 hours in this case) to make a full indie game. But, this game jam had a twist; the top games would be played (and recorded) by PewDiePie himself.

There are a few rules, however. The game has to be exclusively for IndiesVSPewDiePie. All audio, designs and visual assets must be created during the 72 hours (so no Google for you!). However, you can use pre-existing scripts, languages, engines, programming, libraries, scripts or fonts. And also, you have to be cool. No hate speech and no bad content.

Currently, there are 897 games that were published to the jam. This includes amazing titles, such as:

These were two of the funniest games I saw from the jam. My project was Flight Simulator 2020.

I’ve only penned two video game reviews in my day – this one being the second. My first review was for State of Decay, a sandbox zombie survival game reminiscent of Grand Theft Auto. This review will be focused on an indie Steam game that I recently picked up during the ‘Steam Summer Sale’ called Project Zomboid. According to my track record I love zombie games.

I just want to preface this review by saying this game is not for everyone. It isn’t overly exciting or dramatic. In fact, as far as zombie games in general go this game is pretty darn tame. See what I did there? I said “darn tame” instead of – yeah you get it. Despite the games retro feel and soft approach to the ever popular zombie genre, it does have a certain charm and appeal to it that I do so enjoy.

Graphics are not this games strong suit. There, I said it. In fact, to the Monster energy fueled, backwards hat wearing, rage spewing Call of Duty warriors, a game like Project Zomboid is going to look like something out of the Stone Age. Not since their dads dusted off the Ol’ Commodore 64 and forced them to sit and play a round of Loderunner have these young whippersnappers seen graphics this basic. Alright, that’s a BIT of an exaggeration. But seriously, if supercharged realistic graphics are important to you, Project Zomboid could be slightly disappointing.

The closest comparison graphic-wise I can give would be the inexplicably invincible franchise, The Sims. Honestly, how does that game continue to be rebooted year after year? The Sims is the zombie equivalent of a video game series. …

We had a chance to run into an epic game of Johan Sebastian Joust during our time at PAX East.

The goal is to be the last player remaining. When the music — J.S. Bach’s ‌Brandenburg Concertos — plays in slow-motion, the controllers are extremely sensitive to movement. When the music speeds up, the threshold becomes less strict, giving the players a small window to dash at their opponents. If your controller is ever moved beyond the allowable threshold, you’re out! Try to jostle your opponents’ controllers while protecting your own.

J.S. Joust is coming to PlayStation 3 & 4 and Home Computers soon as a part of the Sportsfriends compendium.

The Technician is an upcoming RPG (PC & Mac) created by Indie Developer, Tyler Clark, set in a world that will remind players of 90’s-era pixel art games.  Right now, the game is in the last stages of it’s Kickstarter campaign, and we’d like to urge our readers to take a look!

We had a chance to talk to Tyler and get some exclusive insight into the project!  His vision for the game is quite simple:  Create an experience that players are familiar with, but push the limits of the games everyone grew up with. With the newer game engine, Clark is able to do everything that wasn’t technologically possible during the 90’s, and in turn make a modern-day adaption to the projects that made us all fall in love with gaming.

They are also trying to get away from the calamity that is modern gaming. You know, where you seem to take multiple .556 rounds to the chest and manage to kill your opponent.  They’re focusing more on ordinary people in extraordinary situations, as opposed to “The invincible vs. The unstoppable” game style.

Conflict in the game isn’t usually solved by running into a building and shooting everything you see to get to the objective. But instead, the player’s intelligence is tested as they cut the power to the building, pick the lock to the back door, sneak past the guards in the dark, and obtain the objective without getting caught. Clark feels this will give a much more relate-able, and in turn, immersive experience.

In the game, you’re an average kid who takes care of his little sister, fresh out of college and you actually landed a job that doesn’t involve bagging groceries.  The story begins about six months after his first day of work. So he’s …

If you haven’t checked out the Indie Game, Beat Hazard, yet – we highly recommend it!  This twin stick shooter is a game that runs off the music files you have on your PC!  Things can get a little intense if you have the right music, as you can see.

Check out a UR gameplay video below:

As far as horror games go, this one surprisingly gives more jumps than most big titles.

A cute little indie game made with RPG maker, The Witch’s House offers about an hour and a half of gameplay, not including some excessively aggravating puzzles, which might be short, but considering the nature of the game, it still remains incredibly engaging and fun.

I’m a bit of a softie at heart, and jump scares always catch me out. This game is no exception!  Along with a well thought out storyline, including a twisted ‘truth’ ending (Unfortunately I got the ‘regular’ end on my play – but look it up if you don’t play yourself – it’s great!), The Witch’s House is a great game for anyone looking for something short to play but not to just ‘waste time’ with. The puzzles provide plenty of head scratching, the horror elements will catch you off guard and the game has a lovely soundtrack to boot! Definitely one to check out.

Did you ever sit around as a kid and draw video game characters?  Let’s take this one step further:  Instead of characters, did you sit around and draw platformer (Think:  Super Mario Bros) levels that you hoped would one day be real somehow?  I think the guys at Roundthird software did these things too.

Pixel Press is an upcoming iOS (and hopefully Android) app that will let people take their game-design ambitions to real-life, even without any coding experience.   How it works is this:  The subject prints out a 2-page .pdf file.  One page is instructions, and one page is a proprietary “grid” that the pixel press app recognizes.  The user draws the level on the grid using the guidelines on the instructions page to draw the correct shapes (the app will need to recognize certain shapes, so they can be obstacles, blocks, etc. when translated to the game).  Once the level is drawn, a picture is taken with the iOS device, and the level is scanned into the game using the same technology that makes handwriting recognition possible.  For a full breakdown by the developers, check out this video:

The idea reminds us a lot of something like Little Big Planet.  Both games are more than a “game”, they are a “platform”.  The developer of Pixel Press promises to have user creations downloadable by the entire community so everyone can challenge each other.  Soon after the game is released the best levels will rise to the top via ratings – all of this makes the replayability virtually limitless.  Don’t like drawing by hand?  You’ll be able to play all the levels instead of create them.  Currently, the developers are toying with the idea of an “in-game” level editor that …

Kickstarter has emerged as one of the best ways for a small developer to seek attention for their independent game project.  I would like to share and give a rundown of a few that I’m giving my hard-earned Washington’s to this month:

Boston Festival of Indie Games 2013 – Not your “typical” Kickstarter because this is for an event and not a physical product.  However, this is interesting because of how accessible the event is; and how inexpensive each pledge is compared to the value that you receive in return.  For only $5, you get an “advanced” attendee pass and your name on the website.  Double that ($10), and you’ll get your name in the physical program as well.  They have a number of more tiers after this which give a wide variety of rewards – ranging from concept art and t-shirts, to playable game bundles from independent studios.

A pledge is not required for attendance to the festival, as it is FREE for anyone who wishes to attend.  The festival is on Saturday, September 14, 2013, at MIT in Boston, Massachusetts.

A.N.N.E – A pretty cool-looking game that brings me back to to my SNES and NES days.  As the creator professes, it’s a “Metroid-Vania” game, which means it’s most closely related to platforming games like Metroid and Castlevania.  However an open-world RPG element is promised – with the ability to gain XP and level up your character’s abilities.  The pixelized art-style is gorgeous and the game has some unique presentation, such as a camera that zooms in or out, depending on if you are in a vehicle or on foot. 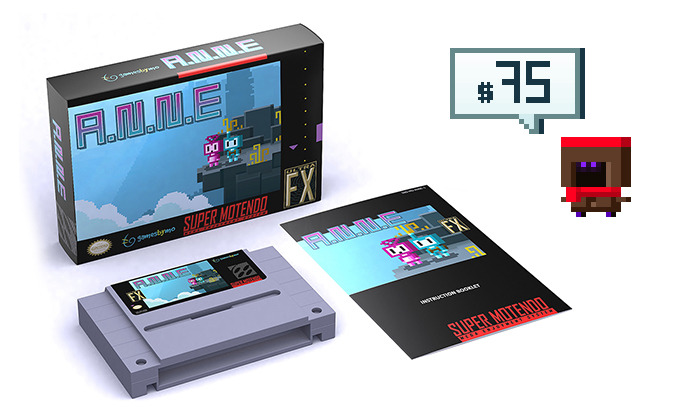 The cost to back the game starts at $1 (to high-five the developer), but the game can be purchased at a starting pledge of $10 …

Usually I don’t put much faith into Kickstarters.  In the beginning, Kickstarter was a novel concept to help an indy project get funded.  The only ones on my radar in the beginning were games and technology, which made sense.  Over time it became kinda saturated and I started to not take them seriously anymore.  There was a Kickstarter lounge at PAX East this year, but I didn’t really care, although I’m sure there were games in there worth seeing and funding.

This is why I was so surprised when I came across “The Hit Squad” on Twitter; an 8-Bit Pixellated movie about an 80’s band who is trying to reclaim their lost fame in current times.  It reminds me of “This is Spinal Tap”.  The animation in the trailer is very good, and the humor is promised to be full of pop-culture nods.  The most impressive part of it all is that so far it has been animated by just one man,  Chris Blundell.  He is looking for the final £5,000 to finish the movie and release it to the masses on DVD, Blu-Ray, and DRM-free digital download.

I’m not sure if it’s the determination of Chris that has me interested, or the fact that it looks like a hilarious 8-Bit movie that I really wanna see, but this is the first Kickstarter I have ever pledged for, and I don’t feel bad doing it.  Check it out!  He only has a few more days left to reach his goal!  Also, don’t worry, exchange rate will be calculated on checkout.